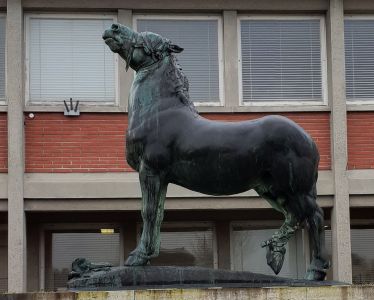 The horse, a creature representing beauty, strength, dignity, and a comrade in glorious battles, is a symbol of many veterinary schools from Texas to Kosice since it was the first species deserving veterinary care. But can a lame horse stumbling right to the abattoir possibly be the symbol of a veterinary school? The nearly 170-year-old sculpture by Emmanuel Frémiet (1824–1910) caused much debate. It was ordered by minister of state, Achille Fould for the veterinary school of Alfort to be set up by its entrance. Frémiet rose to fame not with conventional animal sculptures, but with by pieces depicting the Gazelle, the Wounded Bear, the Wounded Dog, and he won the medal of honour at the Paris Salon with the sculpture of the Gorilla Carrying off a Woman in 1887.

Frémiet, just like many other artists, was especially attracted by horses. His models, which he usually kept for a month by his studio, were selected from among the more than ten thousand horses pulling the Paris omnibuses.

The perfectly muscled body of the young Percheron stallion led for slaughter is strained as he tries to keep his balance following the steps of its predecessors, holding up his broken rear leg roughly put in a splint. He is blinded by a rug, so losing his eyesight he tries to escape his destiny rearing up, with his nostrils open wide, There is a bloody pole-axe and a hoof in front of him, and a rat representing the infernal place, and death peeks from behind it. The sculpture of the horse of Montfaucon – or, as he is called, the condemned of Montfaucon – tells the story of the fate of the faithful animal condensed into a single dramatic moment, the story of the death of a delicate and sensitive creature, which is amplified by the dark history of the place. For Montfaucon was a horrible place, already sung by Villon. Not only the abattoir of beasts of burden, not only a dump could be found here, it was also a scaffold for mass executions. This is also part of the story.

The sculpture was not welcome in Alfort, since they thought that the piece, expressing hopelessness, and the incapacity of the profession would have an unfavourable impact on students, and as a consequence, could not be a proper symbol for the training of veterinarians. The statue, after good thirty years in a depository, had been offered to the veterinary school of Toulouse in 1888, which – though reluctantly – accepted it. First it had been placed near the botanical garden, somewhat hidden from the students’, then, on the 150th anniversary of its creation, it finally got to the place it deserves, by the main building of the school. It symbolizes the cry for help of wounded, sick animals. It is the main mission of the veterinarian to hear this cry, to ease their suffering, and heal them.

Acknowledgement: I would like to express my thanks to the École nationale vétérinaire de Toulouse for the information provided about the horse of Montfaucon, and their kind hospitality.